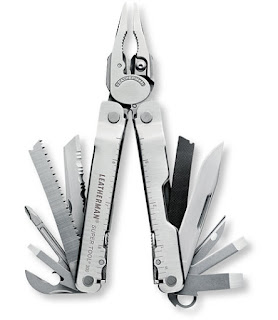 team used leatherman's  for use at the top of towers were climbed to commission and repair equipment.  Well, one day a guy named Chris B. left his somewhere and it was never found.  Some years later, I was climbing up to the top of a tower and reached the equipment box near the 40' level and guess what I found?  Chris's Leatherman and it was in nearly perfect shape with no rust or corrosion at all!  The salt environment of close to the Detroit freeways in the winter is incredible and that is a testament to Leatherman quality.  Chris was off the project somewhere else for our company so I inherited his Super Tool and that is the rest of the story.
Posted by Virtualmoore at 1/31/2016 03:56:00 PM