We travelled quickly from Indiana to Texas for the May 29th graduation of our grandson David. What an enjoyable time we had.  We stayed at the La Quinta on Texas Street at the A&M Campus edge.  There was a wonderful half price book store near where my son works and I bought a bunch of nautical books: World Cruising Routes and Chapman Piloting Handbook were most notable.  We left Texas and made it back to Indiana in two days.

After a week or so of preparation we left in the small car for Green Cove Springs.  We made if as far as Calhoon, GA and spent the night at a rural motel recently converted from Ramada to Quality Inn. The next day we made it to the boat and opened her up as it was in the high 80's on arrival.  The first night we had both air-conditioners running and did not shut them off until we pulled the boat on Wednesday.  The air-conditioners kept her cool in-spite of the 98°F temperatures: on the next year list of things we need is a fore deck cover that will keep some of the sun off the deck.  Tuesday evening we took the dodger and bimini off and rolled them up to take to the storage facility. 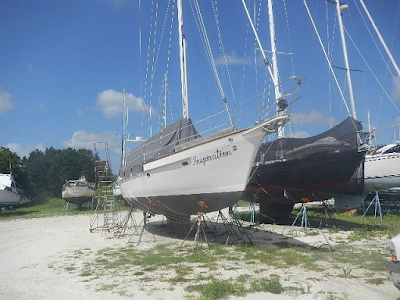 Thursday we installed the "snow" cover  to keep water and sun off the boat from mast to after deck.  It worked out so well last year we did a repeat of the buttoning up.  We talked with Holland Marine and they let usp put it in their yard since we were going to do a lot of the work on her.  I have a punch list of about 15 items I need done before we go on the winter cruise south.  We received some bad news that they are charging us for something we figured we would not be so this will be our first complaint since we started doing business with them.  We stayed the night in the Green Cove Inn Wednesday and Thursday night and left for St. Petersburg Friday morning.

After visiting relatives for a couple of days we left Florida via I-65 Towards Indiana.  We made it as far as north Birmingham, AL the first day and the rest of the way the next day via Indianapolis.  I felt exhausted after this trip and my shoulder hurt badly so a visit to the doctor produced a ticket for a round of physical therapy which has helped a whole lot.