A lot has been going on in our lives.  There were the two trips to Texas, planting the garden, launching Little Yellow, our play around 16' sloop, and re-rigging her plus a few mini trips. Finally, I have been spending too much time with Amateur Radio.

We just returned from Kenosha, WI where we looked at a 1979 30' Catalina.  She was based at South Port Marina and was pretty sweet.  SAM then asked the question -  What will we do with her?  The plan was to sail her around Lake Michigan and then at some point in the future take her down on the first half of the Great Loop.  This is where the boat acquisition became tangled. 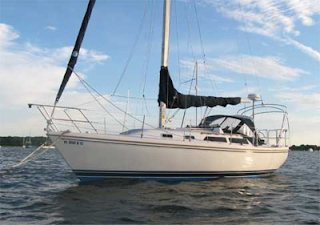 It seems that this particular boat had an Atomic 4 that was raw water cooled.  I am sure all you sailors know what that means:  Everything would be fine until we hit the saltwater of the Gulf.  After entering saltwater how long will an Atomic 4 engine be viable?  We do not know ourselves - maybe 10 years, 20 years or maybe only 2-5 years.  Even if it lasted the full time we were in the near shore gulf or Atlantic, the value would be way less upon return to the Great Lakes.  So this effectively curtailed looking at this boat which was fairly priced and in reasonably good shape.

While on the way to Kenosha, we stopped by Goshen and Elkhart to look at some RVs' that we liked.  We found one we loved but it was twice the price we had set as our target so that ended that too.  The Class A RV's we like are Winnebago, Tiffin, Monaco, Newmar and Itasca (in no particular order).  You would think there would be tons of them available but this is not the case.  Each one we liked, when we called had been sold.  Bummer - either it is a giant conspiracy to keep Charlie from getting an RV or it is a real hot Boomer market.